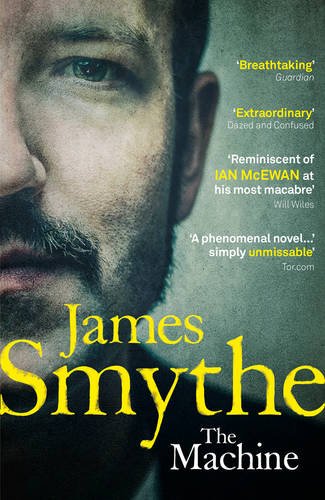 The near future is grim: climate change has brought floods and now a heavy airless heat. Victor had come back from yet another war injured and violent but the doctors had promised to take away the painful memories using the Machine. Instead it had taken everything and Victor had been left a shell. Now Beth has managed to find one of the old Machines. She orders it online and delivery men place its massive bulk in the spare room, next to the bed. It’s the only place in the flat where it will fit. She’s going to reconfigure it and use it to rebuild Victor, her husband. She has planned meticulously. If only she can get Vic back they can face the violence, the fear and the memories head on, the way they should have done the first time.


Smythe has crafted a taut, complex novel, heavy with fear and tension; a novel that explores the deceptions of memory and interrogates the stories we tell ourselves to endure. It’s a novel that frequently had my heart racing and storm clouds gathering over my head as I felt the dread of plans slipping out of control and the palpable threat of violence. It’s not often a novel evokes such a degree of atmosphere and mood. The long hot summer feels unbearably muggy and oppressive whilst the sense of threat on Beth’s estate adds to the claustrophobia. The narrator stays close to Beth throughout; the method allows Smythe to create another layer of tension because you are so close to Beth’s frustrations and anxieties, her headaches and her tiredness.


The other great element is the machine itself. I’m not that well read in the sci-fi classics but I know enough to realise that Smythe has captured an important measure of the uncanny with his machine. It has an otherness; a power beyond human control and understanding that makes me remember echoes of Roadside Picnic and Rogue Moon. The slightly future Britain is brilliantly realised as are the physical descriptions of Beth trying to care for Victor. Furthermore Beth is a complicated character full of desire and frustration, but it’s the descriptions of the machine and its monstrous otherworldliness that lifts Smythe’s novel onto a different level of excellence. I finished it three nights ago and it’s still scratching away at the insides of my head. I can’t shrug it off.


The Machine should have been on BFSA shortlist and I hope it makes the Clarke.