My first encounter with Iranian film was Samira Makhmalbaf’s Blackboards, encouraged presumably by the reviews in the Guardian, at the Curzon Soho in 2000. Back then I had no idea about the New Iranian Cinema – pre or post-revolutionary, or the debates amongst critics. Since then many critically acclaimed movies have been shown at art-house cinemas (or had a DVD release) and now various classics and some of the early films of Mohsen Makhmalbaf and Abbas Kiarostami, unavailable on DVD or blu-ray, can  be found online or via Netflix, whilst numerous books and essays map out the critical terrain. 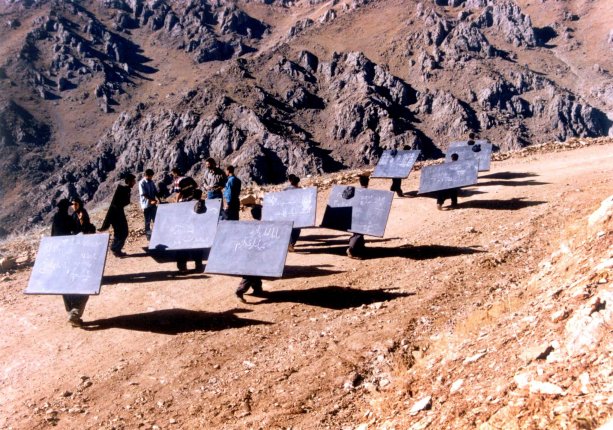 Many of the recent Iranian films shown and feted in the West don’t get shown in Iran and often rely on money from Europe for their production costs. Iranian cinemas meanwhile are full of Bollywood, Hollywood action and home-grown comedies and dramas. This raises a series of related issues - Laura Mulvey wrote this, just a year after A Taste of Cherry had won the Palme d'Or:


“The new Iranian cinema emerged out of comparative isolation, enforced by international politics and the post-revolutionary censorship of non-Islamic art and entertainment. In parallel, however, the government has supported home-produced films that conform to the basic codes of Islamic cultural codes. These circumstances have turned Iran into perhaps the last completely cinephile nation, where a love for cinema flourishes in a way long forgotten way elsewhere. At the same time, the limitations on content and image have arguably contributed to a cinema that in formal and intellectual terms has caught the imagination of critics and film theorists outside Iran too – as Kiarostami’s movies have appeared, foreign art-film critics and audiences have responded to them as to a lost, no-longer-to-be-hoped-for object of desire. Godard is reported to have said at Cannes: “Cinema begins with Griffiths and ends with Kiarostami” (Sight and Sound, June 1998)


Thus Western viewers will benefit from an awareness of the circumstances and history of cultural production in Iran; the impact of restrictions and censorship; the desire for art-films amongst Western critics (and their importance to the festival circuit) and the appeal, amongst cineastes, for the exotic and the obscure. It’s interesting too, that some theorists have been critical of Kiarostami for his lack of engagement with politics (see Farahmand in Tapper 2002) when for me it’s not just that (most) Iranian films manage to be, as Mulvey writes, “surprising, beautiful and cerebral” but political to their core, especially in their sensitivity to women, children, the poor and the marginalised, and in their formal invention. That might be because my experience has been mostly of the films produced since 2000 – those of Samira Makhmalbaf,  Jafar Panahi,  Mania Akbari, Shirin Neshat, Asghar Farhadi and of course, Kiarostami. It also begs a distinction between political critique and social critique. Some Iranian émigrés desire a more political cinema – one that openly criticises the Republic or that would “concern the competing factions in government, representing opposed ’ideological, charismatic, populist, and authoritarian’ views of the nature of political power. This seems a big ask: try to think of a list of contemporary British, American or French films that do that for instance. It certainly causes you to think about the power of art to influence change in repressive regimes and raises the old questions about art and propaganda.


Many of the films of the New Iranian Cinema combine seemingly obverse characteristics - (Italian) neo-realist elements and self-reflexive, self-conscious (modernist) elements, to produce troubling, interrogative texts with innovative forms of cinematic language. Though that isn’t to suggest they are at all similar in form or tone or that they are ever boring.


This month I shall be re-watching a number of films and hoping I can get friends to download a few I’ve never seen. I’m hoping others will take up the challenge and watch some films new to them too. To start off, especially if you’ve never seen an Iranian film, why not try Offside (Jafar Panahi 2006); easily available and cheap, it’s the best football film ever made (not hard) though you never see a football.


I’d love people to watch a film or two and to provide questions and criticisms – if nothing else it would help me to broaden my critical perspective.

Mini Reading List –the online resources are perfect for a brief introduction.


·         Naficy, H (2012) A Social History of Iranian Cinema, Volume 4: The Globalizing Era, 1984–2010 – bang up-to-date textbook full of good insights.
Tapper, R (2002) The New Iranian Politics, Representation and Identity Cinema – seminal collection of essays with a good intro by Tapper and a fantastic short afterword by Laura Mulvey.
Posted by Dancing on Glass at 04:52