I’m intrigued though with how media violence works – when is it exploitative or how can it be used to help us question; the horror of war say, or the banality of evil, and I still enjoy the old question of how on-screen violence might affect our thoughts or behaviour. Studies show that gun violence has increased three fold in films aged at teenagers (PG13 in the USA) since 1985. We also know that the so called “weapons effect” is questionable and that no obvious causal relationship exists between on-screen violence and crime statistics (see, for instance, a recent exchange in Pediatrics journal here and here).  Indeed numerous studies have been done but it’s mostly unfulfilling and lacking in theoretical rigour. Perhaps we need a Cordelia Fine to make sense of it all – what a great book The Delusions of Gender is!


I also don’t really understand why I like it. I remember very clearly seeing a string of violent westerns when I was eleven or twelve; everything from The Wild Bunch (1969) to Once Upon a Time in the West (1968) and from Django (1966) to The Cowboys (1972) and kind of understanding how they wanted to do different things and achieve different effects. I already appreciated some of the politics and the varied aesthetics but most of all I loved the excitement and thrill of the violence. Yet stick me in any vaguely threatening real-world situation and my adrenaline levels soar to other-worldly levels and I become completely useless.  You can invoke words like fantasy, catharsis, release but I’m not sure I really buy that pseudo psychoanalytic stuff. 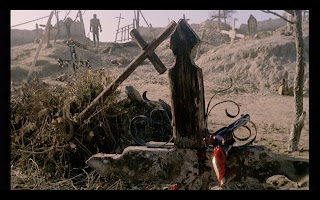 On-screen violence also elicits varying responses from lefties and liberals too. Look at this exchange about Tarantino’s Inglorious Basterds (2009). Joe Allen makes some good points in his review and he’s right to remind us how many films Hollywood has been made about WW2 and why; he’s probably right to suggest there is something “juvenile” about Tarantino’s film but when one of the responses contrasts the ‘fun’ violence of Basterds with the horrific violence depicted in Come and See (1985) I get a little depressed. Klimov’s film is one of the greatest films ever made but why can’t I have both. Inglorious Basterds AND Come and See; Django Unchained AND 12 Years A Slave. You can see where I’m going with this. I don’t really see the triumph of critical rigour or clarity in these debates. And, in the words of Brian May, I Want It All.


Fair enough, but films and TV justify and naturalise violence too - they make it normal, funny, exciting, reasonable, necessary, righteous and so on. Nor would it do to underestimate the power of the moving image to beguile and enchant us – huge corporations don’t spend billions on advertising every year just for the hell of it and I’m sure I’m not the only one who comes out of a film high as a kite or full of desire – for new clothes; a slug of whiskey; a smoke; a kiss.


The obvious answer is that with anything else you talk about context; but then you’d have to conclude Die Hard really does glamorise violence and makes it thrilling and imperative. Die Hard = bad! But that answer that is boring is as hell as I’ve already pointed out. If I can’t have Die Hard, The Long Kiss Goodnight, the Bourne films and Tarantino then life really isn’t worth living, is it? No more shouting at the screen “Come on Bruce - kill that fucker” and so on - Dullsville; Drab City; Dreary Town.  I know the defence really – we’re all able to differentiate between entertainment and ‘real’ life and it’s the inequality, inequity and violence inherent in capitalist society that generates violence. It’s just isn’t that too convenient a way of separating ‘entertainment’ from ‘capitalist society’.


Much of it is down to ideology – how it interpolates us, how we resist it, how we hold contradictory ideas in our head – all that malarkey; and we know what an inexact science it is. It’s a while since I’ve looked at the academic literature so please direct me to fruitful avenues of juicy, ripe scholarly goodness if you know of any.


Different but related questions are raised by Jonathan Rosenbaum. The Act of Killing, for instance, is “a film that fits all too snugly within the category of valorizing and bringing spiritual dimensions to callous mass murderers and serial killers that has already reaped multiple benefits for The Silence of the Lambs and No Country for Old Men, among countless others), whilst 12 Years a Slave is “an arthouse exploitation gift to masochistic guilty liberals hungry for history lessons”. He also writes this:


“. . . having suffered through the 169-minute “director’s cut” of The Act of Killing twice, I find it hard to avoid the conclusion that the media’s validation of mass murderers and relative lack of interest in their victims is by now too well ingrained in our cultural reflexes to be irrelevant to the appeal of Joshua Oppenheimer’s film. Maybe there’s some other use value for his showcase for the feelings of mass murderers that I haven’t yet been able to tease out of this material.”


“What 12 Years a Slave, The Act of Killing, Bastards, and A Touch of Sin (the latter, for me, the best of a dubious lot) all seem to be proposing, in different ways, is that the shocks and jolts of exploitation filmmaking are the most expressive tools we have in order to arrive at the truth about the world we live in. But what is this truth, finally, but that venerable chestnut, “It’s only a movie”?”

These are questions worth answering. First, should we worry about “valorizing and bringing spiritual dimensions to callous mass murderers and serial killers”? Applying this question to anti-heroes like Hannibal Lector or Anton Chigurh in popular thrillers IS fascinating but I’m not sure how we separate that from our interest in murderers, criminals and psychopaths. Lurid fascination is only a short step away from a genuine desire to understand after all. Is it also because we identify with such characters? Do they tap into desires for power and freedom or into our fears and unease?  For a fully-fledged defence of The Act of Killing however I would urge people to read this essay by Carrie McAlinden: actually I do want people to bring a spiritual dimension to mass murderers because I want to see their humanity, understand why they did the things they did and see if they are capable of change or regret. That doesn’t validate them or ignore or show a lack of interest in their victims.


I don’t buy the idea that 12 Years a Slave is for “masochistic guilty liberals hungry for history lessons” or that it has “been custom-built to curry self-congratulatory favour with contemporary viewers” (Cinema Scope review by Julian Carrington). It feels snide, pompous and linked to that kind of assumption that says we’re all somehow a bit racist or a bit sexist.  I happily concede that lots of people luxuriate or find solace in thinking themselves superior – because they understand complicated art or because of the job they do, the school they went to or a hundred other stupid reasons. I’d go further and say that most of us do it at some point or another because there are times when we need to feel good about ourselves. Most of us will hopefully go on to reflect that it’s a distorted and sad way of doing it. So, yes, I suppose a few individuals may be wandering the streets happy that they sat through a two hour film about slavery; but stretching that out to suggest there are loads of guilty liberals out there who have somehow assuaged their guilt by watching McQueen’s film is DUMB, patronising and empty of any analytic content.


Though of course an art film or a serious film can be just as dumb, manipulative or superficial as a blockbuster but McQueen’s film is none of those things.


Rosenbaum’s most interesting charge is that “the shocks and jolts of exploitation filmmaking are the most expressive tools we have in order to arrive at the truth about the world we live in”, added to this:


“One of the most debilitating facets of contemporary media discourse, at least in the U.S., is the unspoken assumption that serious discussion about such topics as torture, mass murder, and slavery can only enter the mainstream public sphere once it becomes tied to the sale of a current movie, regardless of how inane or superficial or inadequate its treatment of that subject might be.
I could point to many films from the last year or so that don’t use these tools [of exploitation] – as could he – but as to whether this is a developing trend I’m happy to give it some more thought. Yet I suspect I’ll come back to where I started. First someone needs to give me a good definition of ‘exploitation filmmaking’ at which point I’ll be able to tell them it’s been around for a long time and can do a marvellous job of complicating, problematizing and investigating our world.
Posted by Dancing on Glass at 04:17