Paolo Sorrentino’s The Great Beauty is high falutin art cinema at its artiest. It’s long, 142 mins, and deliberately invokes Fellini and Antonioni.  There’s little in the way of plot yet if I said it was episodic or that the film was based on a series of set pieces or tableaux vivants I think that would be misleading too. Its construction has a delicious sweep, rhythm and poetry to it, held together by camera work that swoops, glides and circles, and by a central performance by Toni Servillo (brilliant, as he was in The Consequences of Love and Gomorrah). Servillo is Jep Gambardella, 65, an established journalist and writer but really  a socialite and flâneur. He only wrote one successful novel when he was in his twenties. He knows everyone and everyone knows him. He mixes with the rich and the famous, the clergy and the gangsters, the artists and the actors. The first part of the film establishes the milieu and the tone of the movie and it’s only then that Sorrentino introduces the one main plot point.  Jep’s former lover, a woman he hasn’t seen in 30 years has died and this causes him to revisit his past and consider his life.
Through Jep’s eyes we see the decadence of the rich in Berlosconi’s Italy; its emptiness and sourness, and also its moral and intellectual bankruptcy. Thankfully we are also given the glamour and the good times, the parties and the beautiful people. It was the first time my new surround sound really earned its money as I felt a thumping baseline reverberate around my front room and deep into my chest. You feel the heady appeal of what it might be like to be rich and carefree, dissolute and profligate whilst seeing the ruefulness and ennui at the heart of most of their lives. This is one of the wonders of the film – you feel that push and pull but not in any kind of heavy-handed, didactic way. Part of that is down to Servillo’s Jep. He is resolved to this life; comfortable and resigned, compromised and happy, with a world-weary wisdom and a cynicism that somehow doesn’t alienate. When that real understanding of the world is combined with his grief and, possibly, regret, the film accrues unexpected depth and humanity. The other key ingredient to the film’s mysterious balance of forces is Rome itself. Sorrentino captures the city’s bewildering beauty in a way I’ve never experienced before, combining his array of images with a beautiful score. 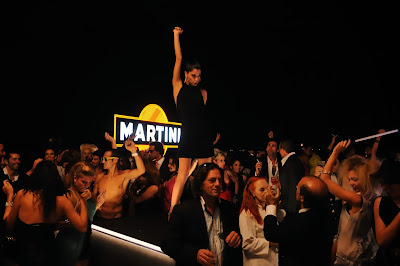 I’m kind of in awe of this film I think. I watch it open-mouthed, bewitched. Unlike so many films that seduce on a first viewing only to disappoint when watched again, The Great Beauty just keeps on hypnotizing me.  I can only compare it’s mastery of technique to middle-period Scorsese or even Bertolucci’s The Conformist. The trouble with calling The Great Beauty high falutin is that you might think it’s too subtle or boring or pretentious to bother with. It certainly has its baffling moments – the introduction of a female stripper called Ramona in the middle section of the film, who then disappears almost without comment, IS baffling on your first viewing. Yet the film is rarely subtle – indeed a good word for it might be operatic, and I was never, ever bored. Rather the main problem that readers of this blog may have is with what I can only call the preponderance of the male gaze - there certainly is a fair amount of female flesh on show in the early part of the film. Some of the images are undoubtedly meant to have erotic overtones but as with so much of the film, Sorrentino wants to seduce us AND show us the seediness. This is the life of the rich, Sorrentino is saying to us, this is how they look, this is how they desire, and it would be a lie not to acknowledge its appeal too, however superficial.
As I watch my favourite films of 2013 again it’s thrilling to see how vital and relevant they are.
Posted by Dancing on Glass at 06:14

Email ThisBlogThis!Share to TwitterShare to FacebookShare to Pinterest
Labels: Best of 2013