The first books I really fell for, that made me a reader, I discovered in short succession back in the late 80s. Reading Paul Auster’s New York Trilogy, John Fowles’ The French Lieutenant’s Woman and Jeanette Winterson’s Oranges Are Not the Only Fruit was exhilarating and opened my mind up to all kinds of new possibilities. I didn’t understand then about metafiction or slipstream but it didn’t matter because I realised that playing with the structure of narrative and stressing their fictionality didn’t make me care any less about the characters or about what was going on but did start me thinking about the nature of ‘realism’ and many more questions too. Reading  two novels by Lavie Tidhar and Nina Allan (The Race) over the last week has reminded me of that sense of wonder, though not, I should stress, with any hint of nostalgia – both novels feel excitingly relevant, political and necessary. They remind me too of how much I loved Eleanor Catton’s The Luminaries last year.


So, A Man Lies Dreaming. I already admire Tidhar’s two previous novels Osama and The Violent Century so my expectations were high.  To begin with I wasn’t sure what to make of the novel’s pulp sensibility - Hitler as main character in a text laced with lashings of sexual violence, sex and kink! However as with lots of great novels, especially metafictional texts, this one teaches you how to read as you go along and keeps on accruing depth as it progresses*. 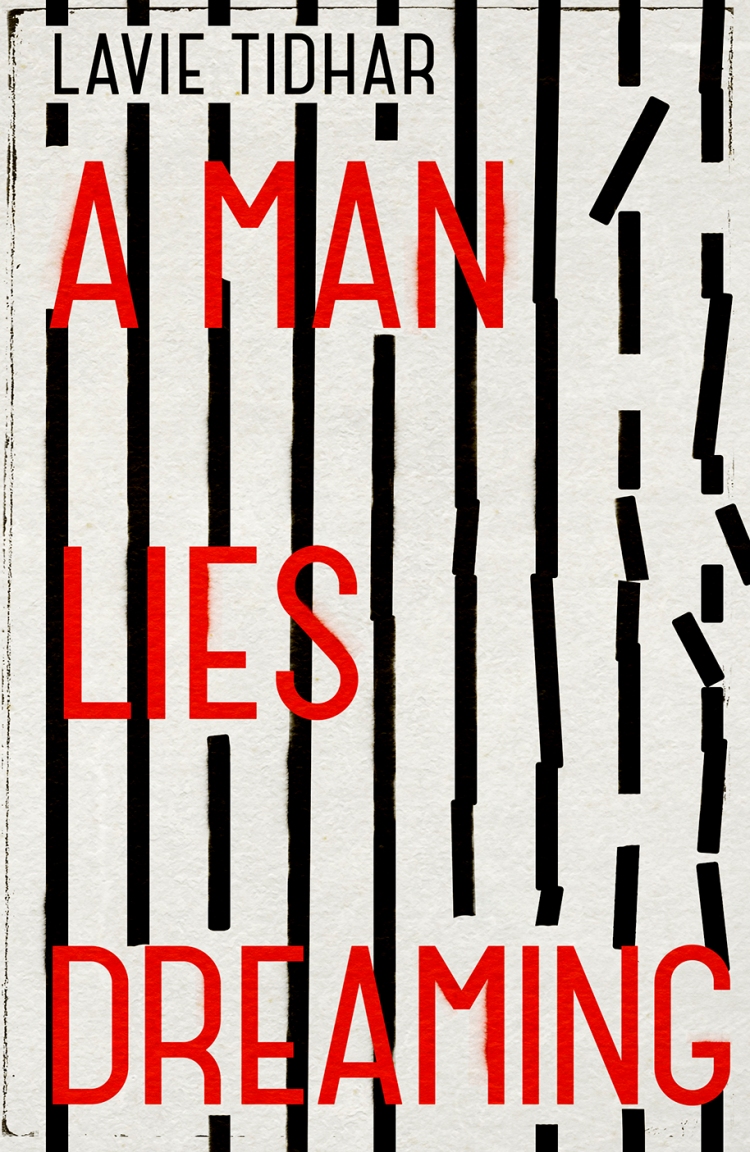 The novel is set in November 1939 - a very different 1939 where the Communists won the 1933 German elections and have since smashed the Nazi threat. Hitler, now calling himself Wolf has made it to London and is working as a private eye. In this London the fascist Oswald Mosely and his blackshirts are on the verge of an election victory. Or so we think to begin with. It quickly becomes clear however that this alternate history is probably the dreaming of a Jewish pulp writer, Shomer, trying to survive in Auschwitz.


The text has three different narrative parts – a diary by Wolf, a third person narrative that keeps very close to Wolf and a third person narrative that describes Shomer’s life in the concentration camp. There are also underlined notes throughout the text that refer back to Mein Kampf or other texts and sources as though an editor, or the narrator, has been searching for historical authenticity. If there are strong similarities to the noir of Raymond Chandler and his ilk at various points there is also a very playful irreverence and a different kind of sensibility that I am simply not used to. The last time I read a pulp novel was probably in the seventies – a young boy fascinated by the giant crab and the naked woman on the cover of a Guy N Smith novel (I think?) - so to begin with I was a little shocked and surprised. I’m not easily shocked or surprised these days.


Being shocked, of course, is a very good thing. Tidhar, quotes Hannah Arendt as one of the epigraphs:

“Clichés, stock phrases, adherence to conventional, standardized codes of expression and conduct have the socially recognized function of protecting us against reality.”

Tidhar wants us to think anew, primarily, perhaps about the difficulty of writing about the holocaust. The novel is also a significant and grave examination of the dangers of racism and the scapegoating of immigrants and Muslims in Europe today. We are so used to our politicians and media playing the race card that it’s all too easy to become inured to it and regard it as just the usual crap. Tidhar wants us to follow the logic through however and investigate the consequences. Perhaps it could mean the construction of another state like Israel, with all the imperialism, nationalism and racism that go hand in hand with such a project. Perhaps it could be even worse: he suggests that if we assume that nothing as bad as the Holocaust could ever happen again we are, most probably, terribly and vainly mistaken.


The text is deliciously clever. Tidhar lets us imagine that Shomer gets some pleasure from putting his Hitler through a series of horrific beatings and enjoys humiliating him with the portrayal of his sexual deviancy. The reader gets pleasure too of course but Tidhar is searching for much more than humiliation. A Man Lies Dreaming is one of the funniest novels I’ve read in a long time: “Wolf went into the small closet to urinate and stared in horror at his circumcised penis before tucking it away again”, but as I laughed it was hard not to remember the horrific scene when Wolf is circumcised. It’s incredible that the novel contains history’s most unsympathetic man, uses him as character and narrator, to provoke not just horror and ridicule but to overcome lazy, binary thinking and inspire empathy and a desire to understand too. There is a diary entry (in Chapter 10) where Wolf dreams that he is in a concentration camp and there are other moments, especially when Wolf remembers his love for his mother, that are incredibly powerful. There’s another bravura section where Shomer lies injured in a hospital bed just as Wolf is pumped full of opiates after a particularly bad beating. It’s a woozy, hallucinogenic and uncomfortable section where the characters start to bleed together and become confused – again, brilliant, suggestive and structurally precise.


To say too much more would be to spoil the novel and explain it away – you’ll have to see how the pieces fit together for you. Tidhar seems to be in complete control of his prose, the structure and the historical material. There are so many brilliant details and finely judged set-pieces. I loved it – it’s fearless and audacious, raucously enjoyable and yet deadly serious.


Just in: I’m writing this just as the Kitschies and BSFA shortlists have been released and I’m disappointed A Man Lies Dreaming made neither. That said it’s hard to criticise either list as 2014 was undoubtedly an unusually rich year for speculative fiction (and secondly because two of my favourite authors are on the Kitschies judging panel!). It’s worth noting that there is no room for Jeff VanderMeer’s brilliant Southern Reach trilogy or Emily St. John Mandel's Station Eleven either. All three works deserve a wide, wide readership.


*Shouldn’t all novels accrue depth and significance as they progress? Probably, but the majority don’t – they really don’t. A subject for another day….
Posted by Dancing on Glass at 05:03