As so often after watching a half-decent Bollywood film I feel caught off guard. Imtiaz Ali, director of Highway also made Jab We Met (2007), one of my favourite Hindi films, a delicious romantic comedy come road movie, distinguished by a great role for Kareena Kapoor.  He also made Love Aaj Kal (2009) and Rockstar (2011). Highway though is very different –it’s SERIOUS. Veera (Alia Bhatt) plays a rich young woman about to get married. Stifled by all the attention at home she sneaks out to meet her husband-to-be and insists on a car ride so she can chill out for a while. The couple stop for petrol and encounter an armed robbery. Veera is taken, brutally, as hostage but the gang are aghast when they realise how rich Veera’s father is – they realise he will use his power and wealth to ruthlessly track them down. One of the leaders of the gang, Mahabir (Randeep Hooda) is remorseless however, insisting he will take Veera and demand a ransom. This all occurs in the first ten minutes, but what follows is neither a thriller nor a cops-and-robbers story. Instead it develops into a meditative road movie come character piece. Mahabir and a couple of the gang take Veera, bound and gagged, and set off on the road. 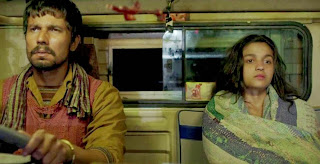 Both Veera and Mahabir have endured terrible childhood traumas that are revealed as the movie progresses, and that explain some of their behaviour, though crucially you never feel that it completely defines their characters. Bhatt is extraordinary at conveying a miasma of difficult, changing emotions and, especially, the joy of testing out new sensations and freedoms. Hooda’s Mahabir is equally good, though in the first half you might give up on him – his gruff tortured brute seems a little too one-dimensional. It’s the way he unfurls incrementally however that is so well judged and his performance in a scene towards the end is almost unbearably moving.

There’s clearly something of the Stockholm Syndrome in their relationship –which the film acknowledges, but which still feels a little awry and misjudged – perhaps due to the obvious difference in age. I’m not sure I felt any chemistry between the 20-year-old Bhatt (often looking younger) and the 37-year-old Hooda. I also objected mildly to some of the contrivances in the plot. Yet as so often these contradictions and problems just make the film even more interesting. It’s as though there are things that can’t be said, emotions that can’t be shown and this creates a film more discursive than any Hollywood equivalent. The pair never kiss for instance and I wonder if it’s because it would have underlined the difficulty of the reality Imtiaz Ali has tried to construct, exposing troubling binary oppositions – protector/protected, father/daughter, kidnapper/victim.
What’s perhaps more amazing is that the film largely succeeds in diminishing such doubts. The men, brutal and brutalised, frightening and frightened start to see India and themselves through Veera’s eyes and start to open up to the world. Mahabir learns quickly to let Veera be (herself); some of the movie’s greatest pleasures come when Veera simply expresses herself. One glorious sequence sees Veera and one of the gang, Aadoo (Durgesh Kumar), dancing to a track on the car stereo. Another is when she sits on a rock, laughing uncontrollably, watching melt water cascade noisily down from the mountains. Does this mean it's another of those 'manic pixie girl teaches bloke to live and love' plots? No way Hosé. It's Bhatt that has the screen time and gets to spread her wings.
Furthermore the film never lets you forget Mahabir’s criminal past but gives you a sense of how he and many real Mahibirs around the world try, and often fail, to deal with their guilt and low self-esteem.  The film gives you a wonderful and powerful sense that courage, friendship and understanding underline any reasonable hope for redemption and renewal.  Finally, whilst many Bollywood movies are beautiful, they are often pretty in a weird look-at-this-beautiful country-wouldn’t-you-like-to-visit-it kind of way. And I’m not immune to that, not at all, but Anil Mehta’s cinematography gets it just right – it’s as if you’re seeing the country’s character emerge through Veera’s eyes.  A.R . Rahman’s score is perfect too.
I look forward to seeing it again.
Kisses for King Khan
As far as I can tell Shah Rukh Khan has only kissed once on screen, in Jab Tak Hai Jaan with Katrina Kaif. It’s not because kisses aren’t common any more – they are; the new generation of stars are all too ready to pucker up but he and Salman Khan have always been pretty consistent in their no kissing policy. Why do I mention this? Not entirely sure, since many Bollywood films have managed to convey passion, romance and sex without (many) kisses for decades but it seems to me the game is changing fast. That said, Chennai Express was still the third highest Bollywood grosser in 2013, making Rs 226.70 crore (with production costs of around Rs 70 crore) but scores nil pois for romance and sex appeal - and blimey it’s awful. Shah Rukh gurns away obnoxiously for the first half of the film before getting some some ridiculous fight scenes towards the end. Deepika Padukone (20 years his junior – just saying*) hardly has to bother until about halfway through when her character realises how loveable Khan really is and has to start mooning around after him. It’s not funny and it’s not clever and is in stark contrast to something like Yeh Jawaani Hai Deewani that offered genuine romance, charisma and great music. Writing this makes me realise, unsurprisingly, how out of tune I am with the cinema going public in India. Looking through the other films that made the Bollywood top ten grossers of the year wouldn’t give any discerning movie-goer much hope though hardly any appeared in critics 'best of 2013' lists either: same old, same old. Anyway, despite the fact he would probably die of laughter reading this, my advice for King Khan would be to pair up with any one of those amazingly talented and beautiful women vaguely his own age - Madhuri, Kajol, Sridevi, Tabu, Preity or Aishwarya to give us a proper, bona-fide comedy romance. With kisses. Otherwise I genuinly wonder if he’s going to have trouble reinventing himself that many more times.

* Its not that I'm becoming a prude in my old age or that I don't think on screen chemistry is possible between protagonists with significant age differences - Bogart was 25 years older than Becall, Pacino 15 years older than Ellen Barkin in the smouldering Sea of Love and of course Ruth Gordon was significantly older than Bud Cort in the wonderful Harold and Maude. It's just that Shah Rukh's romances are in danger of becoming lifeless and impotent.
Posted by Dancing on Glass at 09:58