I've bought a Kindle and against all the odds I'm loving it. Easy to use, easy to sit with the Kindle in one hand and write notes with the other wherever I'm sat. I've also signed up with NetGalley to help with the day job and so I can blog more. The first advance copy I've read is Frances Hardinge's new novel Cuckoo Song (Pan MacMillan), out on 8th May. 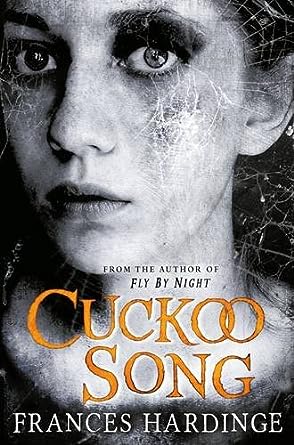 I’d read three of Frances Hardinge’s novels up till now – Fly By Night, Twilight Robbery and A Face Like Glass. More than anything else reading a Hardinge novel is deeply pleasurable - on every page you’ll find a sentence, a figure of speech, a line of dialogue, a joke, an observation or a brilliant idea that will give you pause for thought or astonish. Moreover her characters aren’t inherently good or evil, motivated by abstract ideas, intent on world domination or driven by ‘destiny’; rather they exist in worlds - the Fractured Realm and Carverna - with traditions and social conventions we can recognise and where laws, institutions and ideology put fetters on people’s imaginations, happiness and freedoms. Her characters have political, economic and social motives. Struggles for power or money, self-preservation and idealism are all at the heart of her plots. Hardinge brings sophistication and literariness to children’s fiction whilst never skimping on the entertainment and satisfaction quotient.


Her new novel Cuckoo Song is different. It doesn’t have the same huge canvas or extraordinary feats of world-building as the other novels but is instead rooted in 1920s Britain. Aptly, in this centenary year, it’s a story about World War 1 and its aftermath as the social mores and attitudes of Britain began to be questioned and transformed. That makes Cuckoo Song’s canvas, without wanting to sound too grandiose, modernity and I’m happy to report Hardinge is up to the different kind of task she has set herself. It’s a dark, potent and heady tale of doubles and doppelgangers, monsters and mayhem, courage and conviction.  I loved it and am still a little giddy and euphoric over it. Readers Cuckoo Song is the bee’s knees.


Triss wakes up ill and discombobulated; she can’t really remember what has happened. Her mother and father, Celeste and Piers Crescent are in the room to reassure her. She has fallen into a large pond and become feverish. They reassure her that her memories will fully recover as she regains her strength. More puzzling is the reaction of her younger sister Pen who seems to hate and distrust Triss to an extraordinary degree. The reader finds it hard to understand why however – the narrator keeps very close to Triss so that we appreciate her kindness and honesty. However the novel quickly becomes mysterious, eerie and horrific. The first sign is food. Triss is hungry and Hardinge describes her first meal as something straight out of classic children’s literature – hearty, wholesome and delicious. Later that night Triss wakes up famished. She spies the apples on the tree outside her window and sneaks out to eat. She is ravenous:


She snatched at them, tearing them from their stems and cramming them into her mouth one by one, feeling her teeth cleave into them with a shuddering relief. They were unripe and so sharp that her tongue went numb, but she did not care . . . she dropped to all fours and scrabbled at the early windfalls. Some were recent, merely speckled with rot, others caramel coloured and slack, riddled with insect holes. Their pulp squeezed between her fingers as she caught them up and crammed them into her mouth. They were sweet and bitter and mushy in all the wrong ways and she did not care.


The first quarter of the novel is an uneasy read as Triss questions her sanity and becomes increasingly uncertain and fearful. Hardinge plays this particular literary game with aplomb so that it feels true and convincing rather than manufactured – how much is real? How much is Triss imagining. What is really happening? In fact this first quarter is so successful I wasn’t sure Hardinge would be able to provide satisfactory answers and still drive the narrative forward. I shouldn’t have worried. As the story gathers momentum the sense of the uncanny does slip away a little but becomes instead an adventure with three marvellous heroines.


The novel is rich, in associations of all kinds but especially with fairy tales and classic children’s literature and you’ll think about the way Hardinge is interrogating various tropes and stereotypes. As is always the case with a Hardinge novel I also thought of countless things whilst reading, some intended I’m sure and some purely subjective: Pinocchio, The Box of Delights, the Spanish films of Guillermo del Toro especially Pan’s Labyrinth, the novels of Alan Garner, a BBC serial from 1985 starring Susan Gilmore called Maelstrom – remember the dolls(!) and much more.


People often focus on Hardinge’s world building – the incredible dynamism of her worlds, their social and political authenticity and logic – and her abundance of ideas, but reviews don’t always acknowledge the depth and quality of her writing. Maybe they think they’ll turn younger readers off if they extoll her extraordinary literary skill. Take her similes – I don’t know of anyone that writes similies with the skill, imagination and range of purpose that Hardinge manages. Her comparisons capture sensations and moments in time, create a sense of period and history and generate mood and atmosphere – sometimes you’re astonished by their accuracy, sometimes by their insight, sometimes by their attentiveness to detail and exceptional thoughtfulness. They also slow down the reading process a little because they ask you to reflect and assess, rationalise and discuss. Maybe this is one of the reasons why Hardinge isn’t read quite as widely as some of the fast paced, plot dominated novels that populate the YA bestsellers lists.


Are there any negatives you may be asking? Well, kind of – towards the end there is a degree of sentimentality and a tendency to over explain a little that gave me some doubts. That said since the novel isn’t aimed at 42-year-old men I don’t really want to complain, especially as it fits with the mood and tenor of the novel. Cuckoo Song is more emotionally powerful than Hardinge’s other work, sad and heart-breaking, inspiring and fierce, whilst never losing the moral complexity that characterise her novels.


Reviewing Verdigris Deep in 2007 Farah Mendlesohn wrote that “Frances Hardinge is the best new fantasy writer for children since Diana Wynne Jones. There is simply no one to match her, and I include within that constituency the likes of Philip Pullman.” Seven years later and I’m confident that is still true and for me she stands with Margo Lanagan, Philip Pullman, Philip Reeve, and Patrick Ness as authors whose books I couldn’t bear to miss. What is more astonishing, and downright weird, is that Hardinge hasn’t picked up an award or three along the way and isn’t being heralded up and down the land as a national treasure. Hopefully that will change soon.

There are insightful reviews of all Hardinge's novels at Strange Horizons (in the reviews archive). There's a nice little interview with her over at Pornokitsch here.
Posted by Dancing on Glass at 06:43