The discussion around my post (see below) on the Shadow Clarke site seems to have come to an end. As it developed I was disappointed – not because people disagreed and challenged my ideas – but because it was the usual suspects contributing. I hoped that the final paragraph would be an invitation and I hoped too that more women and people of colour might contribute. Having reread it all carefully I’m a bit less disconcerted and I’m especially grateful to Niall Harrison for responding so eloquently and with great creativity. Thanks to everybody for taking it seriously and engaging. I think there are some really good suggestions.


I’m writing my response here simply because I have so much to do at the moment – not waving but drowning - and can’t afford to get caught up in the discussion any further for now. Sorry, I realise that may be a little counterproductive and unfair! It's a pretty gentle pushback anyway.


Anyone coming to this anew should definitely read the comments first!


So, maybe there are no easy ways out of all the contradictions that are discussed. Maybe we have to trust the process and its inherent subjectivity – it’s a book prize after all! Yet we don’t trust it, or like it, do we? We hate discrimination and bias and we hate that the formulaic gets chosen over the disorientating again and again. I find it very hard to believe that anything is going to change this basic state of affairs anytime soon and so I’m trying to draw conclusions even if they are somewhat idealistic and speculative. A ‘minimum diversity threshold’ (much better than ‘quota’ – thanks Jonathan!) would certainly not diminish the prize for me, it would make me more proud of defending it and committing to it in the same way that I used to prioritise the Orange/Bailey’s prize in my reading calendar. I really don’t get the idea that it would devalue the prize for women and BAME authors – it would be about acknowledging the very real fact of oppression and the systematic damage it does and saying – ‘we are not prepared to put up with this any longer’. As for the puppies – you don’t make anything better by worrying what the right are going to say. You do what you think is for the best and fight for it. I suspect the ‘popular mind’ – whatever it might be - is not very interested in the Clarke award or diversity anyway. Know your audience and know the audience you want to attract.


As a rough idea of award and genre interest I looked for followers on Twitter.

The obvious conclusion to draw from those figures, without getting too polemical, is to look at the (amazing) popularity of Strange Horizons, which is at the forefront of celebrating speculative work by women and BAME authors. There is your potential Clarke audience – start with that 20K and push out from there.
With that said I'd be happy if any or all of Niall's suggestions were taken up.


I guess part of what I was trying to get at more generally is the inconstant and inconsistent nature of judging ‘quality’ in any prize like this and yearning for a different focus. My first interest in the Clarke was due to China Mieville and because of him I discovered Harrison, Priest, Roberts and many more. Then, once I started to look more closely at the genre community I discovered that here were a group of really clever people trying to write about fiction in a way that transcended the usual middlebrow stuff you find in the broadsheets – it was political, theoretical and often original. I found Punkadiddle, Infinity Plus and then Adam’s write-ups of the Clarke; I found blogs by Jonathan McCalmont, Abigail Nussbaum, Martin Petto, Dan Hartland and more. The Clarke was an interesting focal point and a way of expanding my range of reading but it’s quite different now. The speculative community has Strange Horizons and with it a range of critical thought from around the world. Personally, if I add to that Interzone, Nina Allan’s blog, Jonathan’s blog, Twitter recommendations and so on, the Clarke no longer seems half as important. One my favourite things this year was discovering Sun Yung Shin’s Unbearable Splendor and that was down to From Couch to Moon. 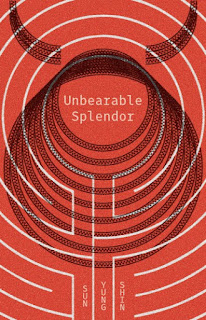 Thus, this year there were only a handful of books on the submissions list that I was unaware of. Moreover last year’s Clarke was a huge disappointment. It had the opportunity to showcase some truly remarkable novels and failed miserably. If I compare that with the richness of the last two Booker winners, by Marlon James and Paul Beatty – and I don’t think I would have read either without the shortlist focus - then it seemed obvious to reorientate a little. I decided to stop making the Clarke a priority…but of course the Shadow Clarke has meant that I engaged again. As I wrote in my post, I’m deeply grateful for the reviews, for the honest discussion and the way it has made me consider certain things anew, but not for the dull assertions that book A is more worthy or original than Book B. That’s why I’m going to keep thinking about my critical practice, and all the contradictions, to see if I can find a different way. Probably not, I’m far too opinionated and I like hyperbole far too much, but it’s worth a go.

Clarke Thoughts
Some thoughts. If anyone has ever read my blog they will, I hope, see that most of the implicit criticism is aimed at myself, though obviously some of what follows touches on various discussions on the Shadow Clarke board.


Subjective taste and critical practice depend on so many factors, thus any reading will privilege certain aspects – close reading, theoretical base, genre knowledge, life experiences, political orientation. Once you remind yourself of that basic idea, it becomes almost impossible to defend the rhetoric and moralism that goes into a special pleading for this book or that. I like a bit of rhetoric and I like a bit of hyperbole – it’s fun. BUT my head would not have exploded if The Power had won this year now would it? It will be hard to stop but I probably should. Moreover, I CAN understand why Priest, Mieville, MacInnes, Kavenna or ANY novel didn’t make it on to the shortlist. The idea that there is some objective truth or taste out there that says differently now seems to me entirely bogus. Even amongst those with a depth and breadth of knowledge about the SF megatext there is no agreement or consensus about the books this year or any year.


This is difficult of course – if we can’t be passionate about the art that we love then what can we get passionate about. When great books don’t receive the acknowledgement and discussion they deserve it feels like an injustice, sometimes a personal affront. The problem with prizes is that they ask us to join together two, perhaps strangely irreconcilable, ways of splitting up literary discourse – taste, value, aesthetic judgement on one side set against criticism and theory on the other. This is probably an unavoidable contradiction – an understandable fudge that we prefer to ignore for the most part because we understand how literature, especially the novel, is so intertwined with humanism, with the middle classes and with a bourgeois outlook, but maybe it’s one we must acknowledge more and explore further. Moreover, even amongst the Shadow Jury and the writers that have regularly reviewed the shortlists there seems to me quite a divergence on their aesthetic preferences and on their theoretical baselines.


Once you get over the idea that the 6 best books – for YOU, or for the good of humanity, or for SF – will get chosen every year for the Clarke then it can be quite liberating. For me the obvious conclusion is that there should be a commitment to equality. The greatest insult to SF, art and humanity is not that Becky Chambers has been on two consecutive shortlists but that there were no women on the 2013 shortlist and only two last year. Add to that the outrageous fact that it is 20 years since a BAME author won. If the Clarke announced their commitment to a shortlist each year to include at least 3 women and 2 BAME authors – as a minimum – that would give publishers something to think about and writers all over the world a little encouragement. This kind of thinking has to be implicit in the judging process anyway, one would have thought, so why not make it explicit and send a clear message to bigots and conservatives everywhere. People might complain that ‘lesser’ books would thus be forced into contention. You’d have to laugh in their faces first and then explain why they were patently wrong.


There is also much said about originality, finding new voices and so on. Yes to all that, of course, but I hate the idea that a shortlist should never again have a novel by KSR, Priest, Mieville or, actually, a few other white men who have already received lots of praise. Why? Judge the text – whatever your criteria. For me that is about its relevance, its pleasure and play, originality, complexity, ambiguity and whether it is asking hard questions.


And BTW, I have no idea what a coherent shortlist is. Coherent how? And after reading the discussions I’m pretty sure no one will ever convince me! Actually, I want to blow raspberries at coherence. Damn, I really should stop with the rhetoric already!


Returning to personal taste……this year’s shortlist felt like a victory to me, especially after last year. But then lesser evilism IS the order of the day in these parts. Three very good books, an interesting one and two I haven’t read. Looking back through shortlists it’s generally hard to hope for anything more. Is that a bit depressing? To settle for less, to NOT reach for the moon? To accept that classic realist texts will win out over experimental or interrogative texts? To accept the formulaic over the disorientating? I’m actually not sure any more because I don’t know how you overcome all the contradictions. One of my favourite books last year was a realist text – Sebastian Barry’s Days Without End – not just because it was beautifully written, exciting and passionate but because it confronted ideas about history, landscape, environment and sexuality.  Was it the same as having my unconscious disturbed and pulled apart by Han Kang’s two novels? No. But I’m happy to have both, to appreciate the work they do and to try to do some work in return.


Part of me is also wondering whether a critical community has a right to the high ground anyway – in taste, morals, experience, whatever – when they/we will, rightly, champion The Thing Itself but not push half as hard for a text like The Swan Book. [Octavia Cade – I know you have tried!]


The Shadow Clarke has been brilliant – some great, insightful reviews; amazing honesty even when it showed up inconsistencies and contradictions; passion, love and care. It is helping me to think about all kinds of ideas and investigate them further; it is helping me to confront my prejudices and lack of knowledge. It’s part of what has made want to try and read in a different way. What about you?