Reading again and The Thing Itself

Oh truth is mutable, saith the sage. Truth is power, not science; or rather, it is science but science is power too. The strong legislate what is true, and after a while we forget that this is whence it came. Our habits of thought are stronger than strait-waistcoats. We walk about with habit-coloured spectacles before our eyes, and see everything as we are accustomed to see it’ [The Thing Itself Adam Roberts]

Reading and watching films are often the main way of navigating my way through life and trying to dislodge those habit-coloured spectacles suffused with ideology and the stories I tell about myself. I mean, sure, people ARE important but sorry, not many of them have the wisdom or the imagination of good art. That doesn't mean I'm a nasty old misanthrope, honest!

Yet, really….how does one navigate through life at all? IS it just like a river? You jump onto a passing log and see where it takes you. Sometimes you stay on for ages; sometimes you hurl yourself on to another one as soon as you can. You have some agency but not half as much as you think? It’s a cliché of course but I do imagine myself like that – generally, scarily, with a hint of Aguirre, Wrath of God in the back of my mind or else on that Mississippi steamboat with Melville’s The Confidence Man. (Or just occasionally I’m on that Houseboat with Cary Grant and Sophia Loren: so many good rivers and boats to conjure up….) 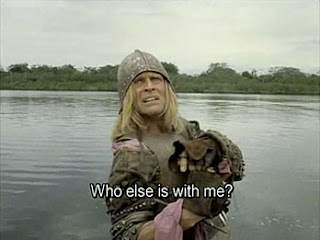 Anyway, I feel like I’ve just hurled myself off my lonely one-person raft and I’m paddling upstream in a canoe, determinedly, trying not to go with the flow, still getting stuck of course, still going back sometimes, but trying. I’m on the lookout for more canoes, villages, towns….people, for fuck’s sake. I’m 44 and feeling, often quite urgently, all the difficult contradictions of mid-life. You could have details but that would be far too uncomfortable for all of us wouldn’t it? Know for now that the autumn was a blur, frantic paddling, lovely relaxed naps whilst tied to the bank – yes we’re still in the metaphor people (!!) – and the odd episode of howling, desperately at the moon after losing my oar.

Good then that I’ve fought to read these last weeks. Good that I’ve launched into such good novels by Adam Roberts, Jeff Vandermeer and various novels on the Costa shortlists though it’s a little hard for me to judge their quality precisely. Good that I'm able to refocus and see a little differently. Reading the first novels after months of not reading is always a particular challenge - about learning to concentrate properly again, thinking critically and attending to form. First up was Adam Roberts’The Thing Itself. I admire his novels a lot and loved his last one Bête. The Thing Itself made me recall the complex, slipstream shenanigans in Christopher Priest’s The Adjacent – and the haunted scientist, Michael Kearny strand of M John Harrison’s Light. But if Priest is smooth and precise and Harrison mordant and challenging then Roberts’ novel is solidly down to earth and enjoyably easy to read even when bursting with pop culture references and high falutin philosophical ideas: comedy and bathos mix with Close Encounters of Third Kind and Kant’s Critique of Pure Reason. 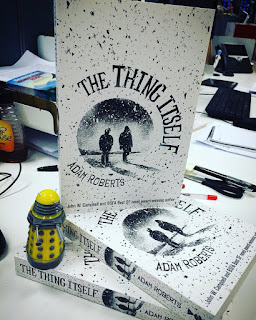 The novel begins in the 1986 in Antarctica. Two scientists are processing data in an isolated research station: they are on the lookout for alien life. One is the brilliant Roy Curtius, obsessed with Kant and the Fermi Paradox, and as the reader will discover, all kinds of crazy. The other, saner character is Charles Gardner who will narrate this strand of the novel throughout.  Gardner is a familiar voice in a Roberts novel – smart, grumpy, funny, sardonic, embattled. Tonally this first chapter begins like a clever, irreverent comedy written by Steven Moffat but ends up something altogether more hallucinatory and horrific. In subsequent chapters Gardner, his life ruined by his experiences in Antarctica, is compelled to revisit those horrific, life-changing events and face up to the truth. These chapters are full of humour, adventure and it should be said, debates both philosophical and scientific. BUT don’t be put off because Roberts has the ability to make complex ideas understandable AND interesting. Alternating with Gardner’s narrative come a number of strands that focus on seemingly unrelated characters in different times, past and future - the first sees two gay men touring Germany in 1900 for instance and is infused with Nietzsche and HG Wells. At first the links seen tenuous and insubstantial but as the novel progresses you begin to pick up on the deeper thematic and symbolic patterns and the plot elements that connect everything together. It should be said too that these alternate strands are ingenious and deeply satisfying. Here Roberts gives us a variety of voices, evocative of time and place. The effect of these layers is to proffer tension, mystery and revelation. Furthermore they underscore the interrogative nature of the novel and all the debates about the nature of reality between Charles and his interlocutors.

There is much pleasure to be had as always – a Roberts novel is so brilliantly discursive, full of ideas, irony and great prose. And funny – always funny. I also feel ridiculously pleased with myself when I catch a reference – this time quotes from Boorman’s Excalibur and Fowles’ Daniel Martin gave me particular pleasure, perhaps because they are so close to my heart. I’m not sure The Thing Itself is quite as good as Bête, mainly, harshly perhaps, because the central voice of Charles Gardner, is too reminiscent of the central voice in Bête, Graham Penhaligon.

But the reason Roberts’ novels are getting better, and I can’t quite decide if he’ll like me saying this, is twofold. First, for me they live increasingly on the edge of genre in all the best ways – in the gaps and boundaries between sci-fi, fantasy and ‘literary’ fiction – synthesizing, questioning, reaching, blurring and demanding. Secondly, whilst the intellectual challenge is just as fierce, these last two novels feel more human, empathetic, grounded somehow – not sure of the best word (as usual) to use. But I care more, and it feels like he’s not ‘only’ (sorry Adam!) asking me to think about how I deal with philosophy or fiction or science or a million other things but reaching in and with ‘infinite tenderness’ touching my heart as well as my mind.

The Thing Itself is another great novel and will hopefully challenge for prizes, just as Bête should have been on multiple shortlists last year.
Posted by Dancing on Glass at 06:03